Jaitley in World Bank: Government is on right track on financial inclusion goals

0 Top-News
A+ A-
Print Email
Union Finance Minister Arun Jaitley has said that Government has led to tremendous progress towards achievement of the universal financial inclusion goal. He was delivering the keynote address at the Annual Meeting Flagship event organized by the World Bank in Washington DC on the issue of 'Financial Inclusion and De-risking'.

Jaitley said that Government has taken various steps including leveraging digital identifications such as Aadhar expanding access networks and digitizing financial benefit transfers for the same. 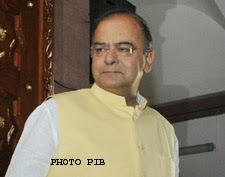 FM further said that the  recovery from the global financial crisis has not been as healthy as we would have liked. Growth remains subdued and the outlook is clouded by uncertainties emanating from both economic and political sources.

Jaitley said that the IMF represents an unparalleled pool of economic knowledge and experience and has a very important role to play in advising its membership on the way forward. This is particularly true of those members whose capacities of economic policy formulation and implementation are less developed.

He further said that the IMF also needs to continue working on removing perceptions of lack of evenhandedness. The Fund’s smaller members should be confident that they are considered as important as the larger ones, and Fund conditionality in programs is not unnecessarily burdensome for them.