Home » Top-News » This Vijaya Dashami is 'very special' for the Nation: PM Modi

This Vijaya Dashami is 'very special' for the Nation: PM Modi

He was speaking in a function organised by the Bharatiya Janata Party to celebrate the birth centenary year of the former Jana Sangh chief Deendayal Upadhyaya in the Capital.

Prime Minister Narendra Modi said that we must give our agenda of development a direction where the poor are empowered and where a poor man himself turns a warrior against his poverty; we all must strive to attain an India free of poverty. 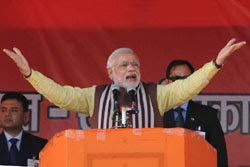 He further said that Pandit ji believed that the economic model of the nation must be bottom-up, not top-down; he believed that the poor and welfare should be at the centre of all policies of the government, and only then the country would truly grow.

He further added that Pandit ji wanted to rebuild such a society that would see no disaffection or discrimination, and where nobody would even think of exploitation — this is what patriotism is, and we are trying to realize this ideal.

Modi said that Pt Deendayal Upadhyay had set an example by establishing a party that was organization-based. The journey from the Jana Sangh to the Bharatiya Janata Party is a unique chapter in Indian history, the credit for which goes to Pandit ji.


Prime Minister recalled that Sri Shyama Prasad Mukherjee would say that if he had two Deendayals, he could change the face of Indian politics.

Perpetrators of Uri terror attack would not be spared: PM Modi