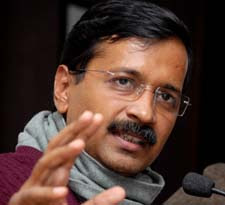 New Delhi: On the issue of demonetization, Delhi Chief Minister Arvind Kejriwal has criticised Modi Modi Government’s sudden decision to demonetize currency of Rs 500 and Rs 1000. He said that the ruling BJP, its friendly corporates and black money hoarders were tipped off well in advance. As a result of this tip off, there was a massive rise in the amounts of deposits in several public sector banks over the last quarter.

He said that a news channal's report from last evening pointed out the stunning growth in deposits, in contrast with the negative growth in deposits recorded in the previous quarters. This extraordinary phenomenon raises the suspicion that the BJP and its network of friendly black money hoarders were aware that the Government was set to launch such a scheme.

He further said that "Some people are claiming that the unusual spike in deposits is a result of the Income Declaration Scheme (IDS). However, we have confirmed that the money from IDS was represented directly at the Government Treasury and not through banks. This means that these deposits are from some private individuals close to the BJP who scrambled to ensure their undeclared cash is deposited before the demonetization," said the AAP national convenor.

Kejriwal also said that the demonetization was not going to bring black money into the system, but will only result in a change of hands. "If someone has Rs 10 crore of black money, the Government has said that there would be a tax of 45% on the deposits and a 200% penalty. This means that 90% of all deposits of unaccounted black money would be taken by the Government and the hoarder would get Rs 1 crore."

He further added that this is a huge disincentive for any hoarder of black money. Instead, what is happening is people are finding ways to convert their black money into US dollars in the black market for Rs 120 a dollar, or at Rs 60,000 per 10 grams of gold in cash. People are even buying out property in cash. This is a better deal for hoarders, since it is better than the 10% they would get if they deposit the money in banks."