Varanasi: Aam Aadmi Party has filed a complaint with the EC against BJP's candidate from the Varanasi Lok Sabha seat Narendra Modi. The party has furnished video/photo evidence along with the gift pack carrying Modi's photo and address of the supplier in Surat.

The party has demanded registration of an FIR under sections 171 B/E of the India Penal Code (IPC) against Modi for trying to bribe voters.

The AAP in a separate complaint to the EC has drawn its attention towards the fact that on April 24th the nomination procession/ rally of BJP Lok Sabha candidate from Varanasi Shri Narendra Modi incurred an expenditure of around Rs 6 crore. 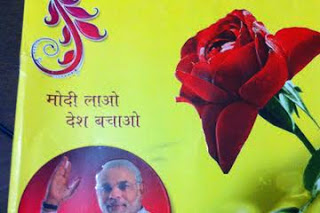 The party's complaint is based on the fact that Shri Modi used a helicopter to arrive at the starting point of the rally and also to leave the city. The party has informed the EC that helicopter rental, hoardings and cutouts bearing Modi's photographs will have to be included in its election expenditure.

The cost of transportation of bringing and taking back people, the distribution of caps T-Shirts, sarees, masks, flags and scarfs - which were distributed in lakhs. according to BJP estimates need to be accounted for.