New Delhi:After the success story of the build-up games during the European Tour against Ireland and claiming the tour with a 2-0 win, the 1, which commences this Sunday, 27th April 2014 in Glasgow (Scotland). While India will be playing its first match against Korea in Pool A, the team also boasts of 7 players Deep Grace Ekka, Monika, Lily Chanu, Poonam Rani, Vandana Katariya, Namita Toppo and P Sushila Chanu from the U-21 squad that bagged bronze medal in the Ergo Junior Women World Cup in Mönchengladbach, Germany last year alongwith the experience of Ritu Rani and Deepika who have played more than 100 international matches, the team is looking at putting up a great show during the tournament.

Speaking on the expectations, Captain Ritu Rani said, “We are fully prepared for the Champions Challenge 1, it will be an exciting tournament with challenges while playing against top ranked countries of the world. Korea is a tough team but girls are fully confident of doing well. We will go by our planned strategies game by game.” 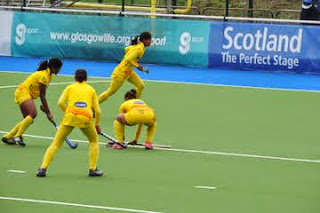 Speaking on the tournament and first match against Korea, Coach Neil Hawgood said, “We can’t take anytime lightly in this tournament, first game against Korea will be challenging as the opponents are coming off a 6 nations tournament against the top teams of the World in New Zealand. We also had good preparations before this tournament playing three matches against Ireland. As we prepare for Asian Games to be held later this year is a test of what we need to do to be able to direct qualify for 2016 Olympics in October.”

With the world’s top teams competing to lift the title of the 8th Women’s Champions Challenge 1, India which holds the current world ranking at 13 will fight their first match against Korea which holds the 8th rank in the world, which is scheduled for the 27th April 2014 at 21:00 HRS (IST). In their second match, India will face Scotland on 28 April 2014 followed by Belgium on 30 April 2014.