New Delhi: Samsung Electronics Co. Ltd, a global leader in technology, announced its ‘Samsung Sports Ratnas’ at the official send-off ceremony of Indian athletes for the 17 th Asian Games. With ‘Our Games, Our Pride’ as the underlying theme, the Samsung Sports Ratna program will support 12 athletes who will be represent India across different sports disciplines at the Games scheduled to take place in Incheon, South Korea from 19 September to 4 October 2014. The Samsung Ratna program was instituted in 1998 for Olympics and Asian Games.

Speaking at the occasion, Mr. B. D. Park said "The Samsung team is happy and proud to be the official partner – Asian Games 2014 for the Indian contingent. Like the people of India, at Samsung, sports hold a special place for us. We have had a longstanding association with major sporting events, including the Olympic and the Asian Games. In India, beyond consistently providing support for the Indian Contingent to the Asian Games and Olympics over the years, we instituted the Samsung Sports Ratna program with the objective of nurturing and developing Indian sporting talent." 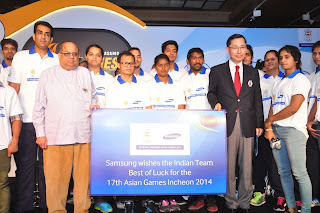 Speaking about Samsung's continued support to sports in India, Mr. N. Ramachandran, President, Indian Olympic Association said, "We are delighted that Samsung has made a commitment to support the 17th Asian Games. We are extremely proud of our long standing association and are confident that Samsung support will further encourage athletes to deliver their best. Our teams have been training hard and we are hopeful of bringing back a richer medal tally from 2014 Incheon Asian Games."