New Delhi: Deepika Padukone is once again ready to hit the screen with this time Arjna Kapoor. Both the stars are leaving no stone unturned in promotion of the movie and both of them were in the Capital in this regards. 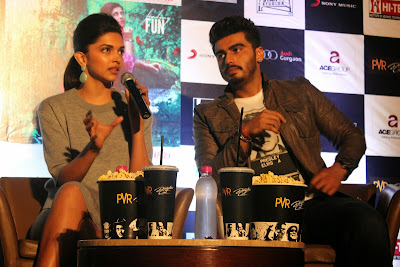 Deepika Said, "This is my first film with Arjun, and he is extremely talented. It is great working with him. The script is quite really different and we enjoyed alot while doing this film".She also added, " Also, It was pleasure working with versatile veteran actors, Naseeruddin Shah, Dimple Kapadia & Pankaj Kapoor. I have Learnt a lot from them. I would thank Homi (Homi Adajania) for choosing me to be a part this film."