New Delhi: IOS group worked closely with Mary Kom and the director on the script to keep it as much close to reality as possible. They got aesthetically fitting brands on board, making it a success for the brands and the makers of the film.

Speaking on the association, Neerav Tomar, CEO & MD, IOS Sports & Entertainment said, "Mary Kom is a legend and its our pleasure to be part of her journey. Brands were excited to be part of this inspiring story and it was great to see the synergy between the two. It’s great to see that IOS and Mary Kom association. Ziddi Dil of Mary Kom has touched millions and we hope the same continues."

Commenting on the same, Rudrarup Datta, Vice President - Marketing, Viacom18 Motion Pictures says, “Mary Kom’s passion for the sport and her determination to fight against the odds to become one of India’s finest woman boxers will strike a chord with the viewers. The film brings together a saga of inspiration, family values and celebrates her never-say-die spirit leading to an impeccable fit for both the film and the brand. 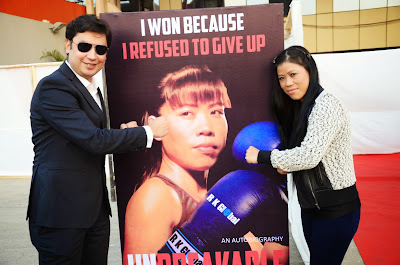 Mary Kom commented on her association with IOS. “I was new to the industry and I wasn’t aware of the lifestyle world. IOS took me helped me climb this ladder. With the guidance of IOS, Mary Kom from a story of a women and a boxer has reached to every Indian and I hope now the league will continue like this.”

Also, Sanjay Leela Bhansali, Director Mary Kom added, “It was an interpretation of her life. My generation connects with this but, it became important for us to tell this story. Mary Kom was an established brand by IOS. I have always connected with the concept of India and here is the woman who took the concept of India to the world. She flew India's flag high and I wanted that she also becomes the hero of the children of today.”