0 Fashion-News
A+ A-
Print Email
New Delhi: Post the success of the first show of "Girl In The City" a new concept created by ASOM, the second show, held recently, saw some overwhelming response from the elite socialites from the party circuit. ASOM, a newly opened club in Dwarka (Delhi), designed this concept with fashion parties to be held every Thursday at the luxurious location of Radisson Blu, Dwarka with fashion designers. The second show of “Girl in the City” showcased some incredible designs by Vikrant Makkar and footwear designer Swati Modo. 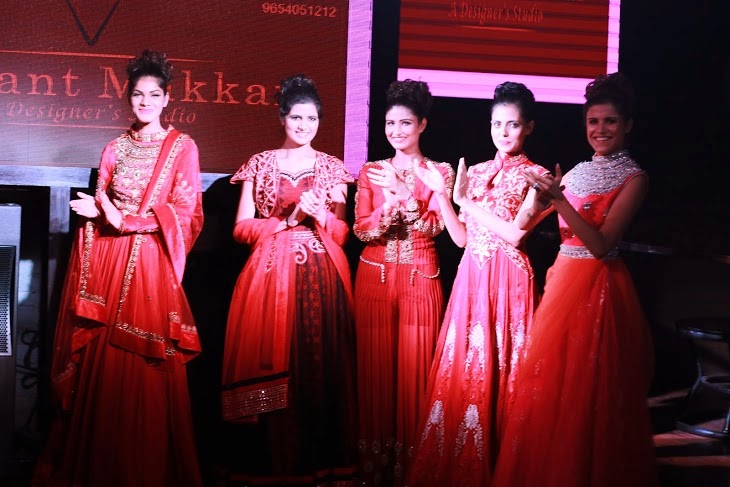 Vikrant Makkar an awarded "Emerging India Fashion Designer" from Delhi showcased his new vibrant and glittering ethnic collection in the fashion show. During the fashion show he unveiled his new collection displaying handwork and embellishments of Zari and Kundan on the traditional preferred colours like red golden and sky blue. This collection of unique designs with traditional colours will definitely get you tuned and desirable to own one for coming festive season.
Swati Modo, a name in the footwear design industry, showcased an exclusive collection of footwear-No Strings Detached. The foot wears are colorful and bold chunk heels bright and shimmery depicting flavors of “Swati”. This collection is a dedication to those relations that we can’t detach from, be it our family or friends. During the occasion, Ms.Swati said, “I am dedicating it to all my friends who have been my "never dying" support. I showcased this collection alongside my bestie Shekhar Sharma, one of such string in my life that never gets detached.”
Many well-known names of Fashion fraternity graced the event with their presence. Talking on the fashion show, Mr.Ishan Grover, Owner-ASOM, shared, “We designed the concept of “Girl In The City” to bring together fashion fraternity and party circuit under the same roof. Post the success of the first show, I am enthusiastic to make this concept a trend that every party people would mark in their schedule. It is amazing to see that our customers have liked this concept so much so that even the second show is a hit too.”