Earth Day Observed to protect the environment to save Earth 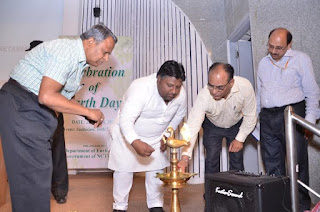 New Delhi:Earth Day is celebrated every year on April 22 however this April 22, 2020 is very important land mark in the history of celebration of Earth day...Yes...this Earth Day 2020 will mark 50 years of Earth Day. Earth Day 2020 is the reason to acknowledge the importance of Earth and to begin a noble initiative to mobilize millions of people to make responsible about the concern of the Earth. As the April 22 is observed as the Earth Day and it was the occasion for Delhi Government to celebrate the same. Earth Day was observed by Delhi Government on the Spot Poster Competition on Odd-Even Scheme and Air Pollution was organized among the students.

Environment Minister, Sh. Imran Hussain graced the occasion and gave away prizes to the participants.
It is important to note here that the Delhi Govt. has established more than 2000 Eco-Clubs in various schools and colleges for sensitizing budding citizens of the society about the various aspects of environment protection and control of pollution in various forms.

Speaking on the occasion Sh. Imran Hussain appreciated the efforts of School children and their parents in making Odd Even Drive of Delhi Government a success. The Minister informed that implementation of Odd Even drive, massive tree plantation, regular review of the action taken by stakeholder Departments against violators found indulging in burning of dry leaves, waste material, plastic etc. in open as well as the owners and builders violating dust control measures while carrying out construction activities has helped in checking air pollution.
Meet Rajasthan Girl Suman Rao: The 2nd Runner Up at the Miss World 2019 in London
Sh. Hussain also informed that neighboring states have been requested to regulate the operation of 4000 Odd brick kilns. Neighboring states have also been requested to restrict burning of agriculture residue as the pollution does not recognize geographical boundaries and such instances of burning increase the air pollution in the entire National Capital Region.

Spinal Cord Injury- How to Care in Emerging India

The Minister also encouraged the children as well as appealed to citizens of Delhi to lend a helping hand in the efforts of Govt. of Delhi for reducing the ill effects of pollution and protecting the environment.