0 Entertainment
A+ A-
Print Email
New  Delhi: Amid the much hype of the movie Sultan and Dangal, it has been said that the Jagjit Kaliraman who gave training to Salman Khan in Sultan and Kripa Shankar Patel who trained Amir Khan for Dangal were in Delhi to talk about the film and the importance of 'Kushti' in the Hindi cinema. Present at the event were Ashok Aggarwal (President of Luv Kush Ramleela), Sukhbir Saran and Arjun Kumar(Secretary).

Jagjit Kaliraman, son of the legendary wrestler Changi Ram will be playing a character of Ravan's younger brother 'Ahi Ravan' in Luv Kush Ramleela this year. Talking about the film 'Sultan' he said "We have worked really hard to make the fighting sequences look like the real life 'Kushti'". 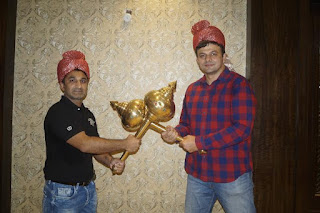 "People considers 'Kushti' as a game of villagers. Films like Sultan and Dangal will bring a change in Hindi Cinema and will motivate real life 'Pehelwans' to perform better and win medals for their country."He said in a press conference held in Delhi.

Amir Khan's coach from 'Dangal' Kripa Shankar Patel is a Arjuna award winner and will play 'Mahareech' in Ramleela. He told that he's been a part of Ramleela since his childhood days and feels that Luv Kush Ramleela has paved ways for Ramleela play and has taken it to another level.

He said "People has a stereotype that women are just for the kitchens and to take care of the household chores but after Dangal women would be motivated to do 'Pehelwani' and will prove that there is nothing that a Women can't do" 'Sultan's' production company has organized a special screening for just the wrestlers in Delhi, Indore, Rohtak and Pune.