Home » Sports-News » Run For Rio: PM urges athletes to give their best for the country

Run For Rio: PM urges athletes to give their best for the country

0 Sports-News
A+ A-
Print Email
In a bid to celebrate 'Olympic' mood in country, PM Modi to flag off 'Run for Rio' in capital today in a colourful function here. The Prime Ministerflagged off the “Run For Rio” at the Major Dhyanchand National Stadium in New Delhi.

The Prime Minister said every athlete of the Indian contingent has worked hard to earn his or her place, and the players will surely give their best for the country at the Rio Olympics. He expressed confidence that the Indian athletes would win the hearts of people across the world, and show the world what India is about. 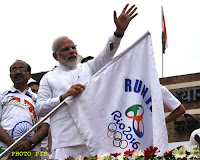 Urging the nation to prepare for the 2020 Tokyo Olympics from today itself, he asked every district of the country to ensure that at least one athlete from the district qualifies for the Olympics next time.

The Prime Minister said this time the contingent has been sent in advance, so that players get familiar with the conditions.