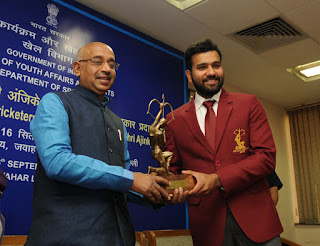 Speaking on the occasion Shri Goel said that  while there is no doubt that  cricket is among the most popular game in India, the current government under the leadership of Prime Minister shri Narendra Modi is committed to promote indigenous  and other sports as well. He said , the recent success of Athletes at Paralympics , 2016 has made every Indian proud.

Do You Know: The Arjuna Awards, instituted in 1961, are given to sportspersons for consistently outstanding performance for four years preceding the year of award and who have also shown qualities of leadership, sportsmanship and a sense of discipline. The awardees are given a statuette, a certificate, ceremonial dress and award money of Rs. 5 lakh.