0 Entertainment
A+ A-
Print Email
'7 Uchakke', are set to rock the theatre including Manoj Bajpayee and Vijay Raaz along with Aditi Sharma. All the stars were in the Capital to promote the move.

The starcast included brilliant actors Manoj Bajpayee and Vijay Raaz along with Aditi Sharma who had appeared in films like Ladies vs Ricky Bahl, Director Sanjeev Sharma and Producer Rahul Mittra. The film is based on two groups of Uchakkes that will make you laugh like hell. The shooting of the entire film is done in Delhi including various parts of Old Delhi. 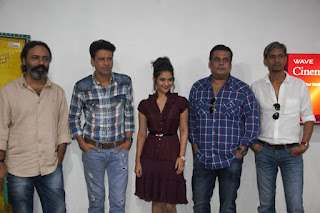 "The scenes in this film will make you feel happy for sure" said the director Sanjeev Sharma. Actor Manoj Bajpayee also gives the surety that people will love this film and this is a film to be watched in theatres. Comedian and actor Vijay Raaz seemed tired of getting demands for his dialogue of "Kaua Biryaani" and said "this film's dialogues will replace all my previous films' dialogues.

The film has some UA words by Vijay Raaz like 'Lomri ke'. Actress Aditi sharma also seemed excited working with her co-actors and said "it was a great experience working with all the uchakkes in the film". Produced by Wave cinemas, and directed by Sanjeev Sharma, the film will release on 14th October.