0 LifeStyle
A+ A-
Print Email
This time it was noted Bollywood actor Ajay Devgan who burns the effigy of Ravan in the Ramleela function in New Delhi. Chief Minister of Delhi Arvind Kejriwal was also the guest for the occasion.

BollywoodArtists and Ramleela: Gurleen Chopra in glamrous look as Sita 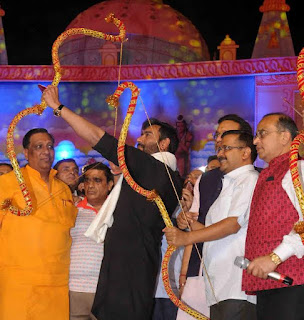 As the Navratri festival culminated with Dussehra yesterday at the Lav Kush Ramleela in Delhi, the actor film maker shot a fiery arrow to set ablaze the effigy of Raavan.

A crowd of more than 1lakh 50 thousand people was present at the venue to witness this. Ajay Devgn, who is gearing up for his next release Shivaay, was delighted to be present there!