0 Top-News
A+ A-
Print Email
The Prime Minister, Narendra Modi has said that those countries who are sheltering terrorism, can’t be sphere. He further said that we are not the country which welcomes the war and we like peace. He was addressing a public gathering at the Dussehra Mahotsav at Aishbagh Ramleela Ground in Lucknow today.

Greeting the people on Vijaya Dashami, the Prime Minister said, he is fortunate to be a part of this ancient tradition of Ramleela. He described Ramleela as the festival of victory of truth over falsehood; and of defeating the oppressor. 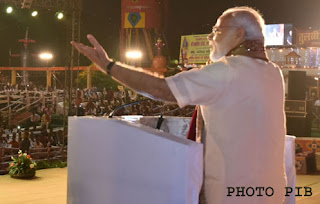 He said that as we burn Ravana every year, we should all resolve to remove the ills from ourselves, our social structures and our nation. He asked the people to resolve to end ten shortcomings within themselves, each Dussehra. He emphasized that all of us have the strength to try and ward off these evils, and make this nation great.

Describing terrorism as the enemy of humanity, the Prime Minister said that Shri Ram represents the best of humanity, and is an epitome of sacrifice and dedication.

Perpetrators of Uri terror attack would not bespared: PM Modi

ThisVijaya Dashami is 'very special' for the Nation: PM Modi

The Prime Minister said that day is also observed as the International Day of the Girl Child. Speaking out strongly against female foeticide, he said we must strive hard to bring an end to such an evil practice.