Home » Entertainment » Fuddu: Interesting Movie which is all about the common people

Fuddu: Interesting Movie which is all about the common people

0 Entertainment
A+ A-
Print Email
The upcoming movie 'Fuddu' is all set to rock the theatre with the many stars including Harman Joshi and Sunny Leone and also Guahar Khan too has done a song in the movie. Pawan Kumar Sharma Pradeep Gupta (Producer), Gandharv Sachdev and Anita Hassanandani and others stars were in the capital for the promotion of the movie.

'Fuddu' is a film on the common people who become 'Fuddu' in their day to day lives.
Popular Television actress Anita Hassanandani who is currently playing a negative role in the serial 'Yeh Hain Mohabbatein' has done a rap in the title track of the film. Sharing about her experience, she said "When they approached me for doing the rap, I thought they are making a Fuddu out of me. I never thought I would do a rap in my life. It was challenging and a different experience for me" 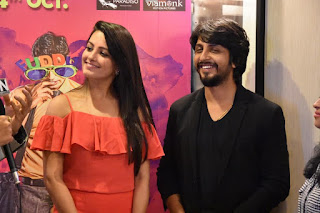 Pawan Kumar Sharma, the writer and the co-producer of the film when asked about the USP of the film said " We are sure about our content. Today it is all about the content game. Sometimes even the superstar in the film couldn't work"

The film has total 10 songs where many celebrities will be seen. Sharman Joshi and Sunny Leone will also be seen together in a song. Guahar Khan too has done a song in the movie.
Directed by Sunil Subramani the fim is scheduled for a release on 14th October.