0 Top-News
A+ A-
Print Email
New Delhi: Prime Minister, Shri Narendra Modi said that India has never attacked another nation. Recalling the sacrifices made by Indian soldiers protecting foreign lands in the two world wars PM said that  the world must recognize this sacrifice.  Modi  discussed these things during the inauguration of  the Pravasi Bharatiya Kendra in New Delhi.

Speaking on the occasion, he said that the birth anniversary of Mahatma Gandhi and former Prime Minister Lal Bahadur Shastri was an apt occasion for such an event. He said Mahatma Gandhi had left India, but the call of the nation brought him back. 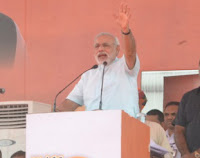 He said the Indian diaspora should be looked at, not just in terms of its numbers, but also in terms of its strength. He said that for years the term “brain drain” has been in vogue. But if we look at the diaspora as our strength we can convert it this to “brain gain.”

The Prime Minister said that at a time when the world is keen to engage with India, the “fear of the unknown” can be the biggest obstacle, which the Indian diaspora can help overcome.

Emphasizing the importance of connecting with the diaspora, he said former Prime Minister Atal Bihari Vajpayee had initiated the concept of the Pravasi Bharatiya Divas, which has been continued by successive governments.

Perpetrators of Uri terror attack would not be spared: PM Modi

The Prime Minister said that India, and especially the Ministry of External Affairs, has done significant humanitarian work in the last two years. He noted how not just Indians, but citizens of many other countries have been rescued from conflict and disaster situations.

The Prime Minister said that India has never attacked another nation. He recalled the sacrifices made by Indian soldiers protecting foreign lands in the two world wars, and added that the world must recognize this sacrifice.

On the occasion, the Prime Minister also visited the exhibition on “Gandhi – Ek Pravasi.” He launched a booklet on Yoga Protocol for Diabetes control, and distributed prizes to winners of the ‘Know India’ Quiz.