Time ‘Person Of The Year’ Poll: Narendra Modi Leads Donald Trump and others 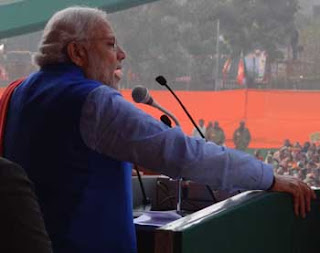 Amid the much hue and cry over the withdrawing the country’s high-value currency notes, Prime Minister Prime Minister Narendra Modi in ahead in the race of the famous TIME’s Person of the Year Reader’s Poll. Right now Modi  is currently ahead of other figures including United States president-elect Donald Trump

According to media reports, Prime Minister Narendra Modi is currently ahead of other figures with total 11 percent votes. WikiLeaks editor-in-chief Julian Assange has achieved 9% of the vote, Trump has 8%.

According to the media repots,  Narendra Modi  has taken the decisive action of withdrawing the country’s high-value currency notes Rs 500 and Rs 1000 recently.

By this step, which is understood that Modi has taken the decision as  a move against corruption.  Apart from this, he  has also  ratified the Paris Climate Change Agreement recently.

Russian President Vladimir Putin, US gymnast Simone Biles, North Korean leader Kim Jong-un and singer Beyonce Knowles,outgoing US President Barack Obama are also in race for the same. According to the sources, despite the fact of the voting, it is the editors of the magazine who will take the final decision.

For the much awaited event for the worldwide, magazine will reveal its Person of the Year on December 7.