Home » Entertainment » Acting in a thriller film is a roller coaster ride: Vidya Balan for ‘Kahaani 2’

Acting in a thriller film is a roller coaster ride: Vidya Balan for ‘Kahaani 2’ 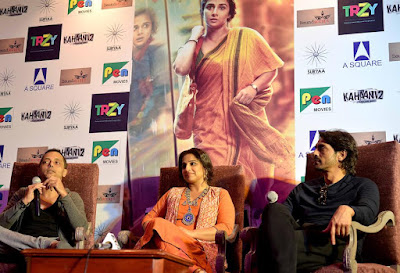 'Parineeta', 'The Dirty Picture' fame Vidya Balan  is all set to rock the silver screen with the 'Kahaani 2'.  In 2012, this director and actor duo amazed everyone with the terrific story ‘Kahaani’ being perfectly portrayed by Vidya Balan.

Balan who started her acting career with television show 'Hum Paanch' might have never thought that she would come out with such flying colors. After proving her acting skills in films like 'Parineeta', 'The Dirty Picture', 'Bhool Bhulaiyya' and others she has now thrilled everyone with her unconventional acting in the promos of 'Kahaani 2'. After the trailer release, people still fail to speculate the story just like the part 1.

This time joining the talented team will be Arjun Rampal and we wonder with such amazing collaboration, the film is surely going to be a hit in the theaters. Arjun Rampal whose last musical flick 'Rock on 2' couldn't do well at the box office when asked if demonetization would effect 'Kahaani 2', he answered "When a script is good then people are bound to watch the film. I believe that the step is taken for the betterment of our country. Lose and gain go together so sufferings are temporary but the result will be fruitful"

Vidya Balan who will be seen as two different personalities in the film, first where she will be playing a helpless mother looking for her kidnapped daughter on the other hand she is charged for kidnapping and murdering. When asked about her experience, she said "I am a very restless and impatient woman. I really like this genre. Acting in a thriller film is a roller coaster ride and is interesting to work on."

The film is not a sequel but another story will be told in this franchise said the director Sujoy Ghosh. Presented by Pen India Limited, the film will be releasing on 2nd December, 2016.