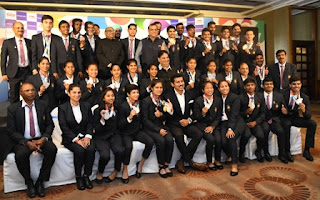 Dr. Narinder Dhruv Batra, President Indian Olympic Association said, “The Indian Olympic Association is extremely proud of all the medal winners for their excellent performance. These medalists have made the entire nation proud and the IOA is felicitating them with cash awards. The success in the Youth Olympic Games is good sign that National Sports Federations are on the right path of preparations for Tokyo 2020 Olympic Games.”

Congratulating the athletes, Mr. Rajeev Mehta, Secretary General, Indian Olympic Association said, “The young athletes have all presented their best performance during the Games. IOA is proud of all of them. From just two medals in the previous edition to thirteen medals within four years, the progress is definitely remarkable. He also applauded the efforts of the coaches, Federation officials, MYAS and SAI, whose collective work made this historic
success possible."