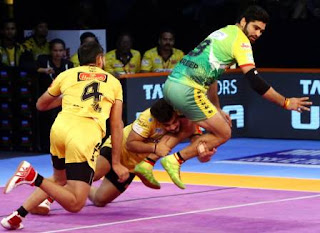 With Pardeep misfiring and their defence having an off night, Patna suffered their second defeat. Manjeet and Vijay together score 16 raid points for Patna but it wasn’t enough. For Telugu Titans, Rahul Chaudhari got seven raid points.

Telugu Titans defence started off brightly as they sent Pardeep Narwal to the bench and led 2-0 after two minutes. Nilesh Salunke scored with a two-point raid to make it 4-0 for Titans in the third minute. Patna Pirates scored a bonus point and sent Rahul Chaudhari off the mat to make it 3-4 after five minutes.

Patna Pirates got two point raid through Manjeet to lead for the first time in the match in the ninth minute. It took Pardeep Narwal 10 minutes to open his account as Patna Pirates led 8-6. He followed it up with a two-point raid in the next minute as Patna inflicted the first all out of the match to lead 11-9.

Telugu Titans suffered from Rahul Chaudhari’s indifferent form in the first half. Patna Pirates maintained their advantage at the end of the half as they went into the break leading 17-14.

Rahul Chaudhari scored a raid point in the 25th minute as Titans inflicted an all out to lead 22-21. Telugu Titans picked up two bonus points and then scored a tackle point to lead 25-21 after 27 minutes.

PardeepNarwal had a quiet start to the second half as he scored just one point in the first 10 minutes. Patna Pirates were trailing 24-27 when they sent Rahul Chaudhari to the bench to cut the lead to just one point. Telugu Titans forced a super tackle in the 33rd minute to lead 29-28.

With less than five minutes to go, Manjeet scored a crucial raid point as Patna tied the match at 30-30. AbozarMighani sent Pardeep Narwal to the bench with a brilliant super tackle and gave Telugu Titans 32-31 lead. MohisnMaghsoudlou made a critical raid in the 39th minute to give Titans 33-31 lead.