Home » Entertainment » Raavan is in my blood my veins,says Puneet Issar for his role of Raavan

Raavan is in my blood my veins,says Puneet Issar for his role of Raavan 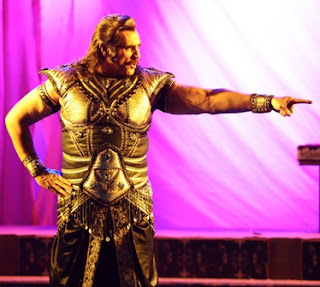 A well known wicked villain of Bollywood and TV star Puneet Issar has left no stone unturned in displaying the character of his favorite and challenging role of 'Raavan’ for the world’s biggest Luvkush Ramlila this year.

The actor who was witnessed in Bigg Boss season 8 and appreciated for his 'Duriyodhan'  role in Mahabharata TV show, who have already performed and known for his character of Raavan for shows Raavan Ki Ramayan and many others will now excite us with his soulful performance in LuvKush Ramlila.

His roles are always fun to watch and got a huge amount of applause whether it's Duriyodhan or  Parshuram  in   TV shows.

The actor with the Calibur of playing such harsh roles is coming up with its favorite character. According to Puneet, Ravana is his dearest character and he's very determined for this role.

Though, he is always been appreciated for such kind of malicious role in the entertainment industry.