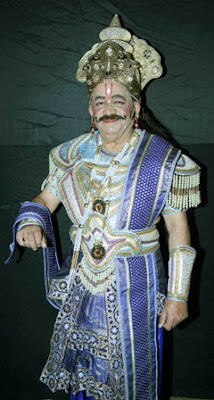 You can't believe this role of the Union Minister Dr. Harsh Vardhan ...Yes he his playing the role of King Janak in the LuvKush Ramlila oragnised in New Delhi. Yes...famous LuvKush Ramlila has not only its past for its narration with great performances of not only Bollywood celebrities but also with politicians as well.

And a cherry on the cake was the performance of Union Minister Dr. Harsh Vardhan who created magic by his performance as Raja Janak, yesterday at very famous Lal Quila Midan.

The entire team of Ramlila showcased the story of Ahilya reformation by Lord Ram. Along with welcome of Lord Ram & Laxman in Janakpuri. Dhanush destroyed for Sita Ji's Swayamvar and intense conversation between Laxman and Parshuram.

The character of Rishi Atri was portrayed by MLA Dr. Vijender Gupta. Lord Ram by Angad Hasija, Shilpa Raizada was Sita Ji. Raavan's hardcore look revealed by Puneet Issar and Vishwamitra was Girija Shankar. All the artists with an entire team of LuvKush Ramleela performed and participated graciously. A lot of audiences, media were also there to witness the purity of Ramleela.

This year the grand traditional show will be highlighted for the National and International audience through Television. The 40-year-old LuvKush Ramleela is started from 10th October and will be showcased till 21st October 2018.