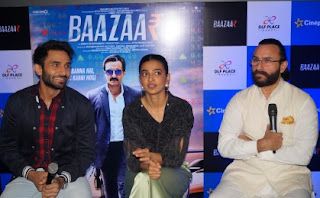 Written by Nikkhil Advani, Aseem Arora and Parveez Sheikh, movie Baazaar is set in the backdrop of money, power and business, largely based on the Stock market. Directed by Gauravv K. Chawla, Baazaar is all set to release this coming 26th October.  Saif Ali Khan along with Radhika Apte along with them debutant Rohan Mehra, actress Chitrangada Singh shared their view and feeling for the upcoming business crime drama  movie.

Talking about his character in the film Saif Ali Khan stated, "My character is of a rich Gujurati businessman, who is proud and bit aggressive, he don’t respect old families, always wants to challenge orders & situations. I can say a corporate reader who is only interested in profit and money. Yes he is a dangerous man, i can say it was one of the best role i had done till now, i really enjoyed doing this film and i hope people will like this film."

On asking about the different characters portrayed till now, Radhika Apte stated "I have been thinking about it recently, and i can say one thing that definitely started to happen in my life that you know when you portray different characters, you come across with certain parts and somehow it sinks with your personal life. You attract certain stories towards you, you have to play such parts which resemble people.

You have to play that convincingly. I think its teaching me empathy. It teaching me how to not be upset and angry, and make me understand where people come from and let them be. On another level i feel this is one of the most different profession in a way, the amount of people you meet and amount of stories you come across every day. It’s really inspiring to see such creativity, challenged inspired."