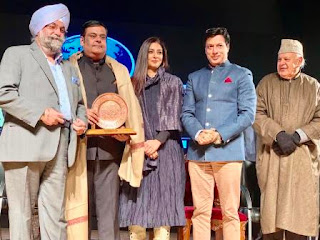 The fourth edition of the Kashmir World Film Festival (KWFF) was inaugurated at a packed Tagore Hall in Srinagar.

Madhur Bhandarkar and other opens the Kashmir World Film Festival  in SrinagarThe mega opening of the festival saw luminaries of the film industry being felicitated by Farooq Abdullah & other dignitaries.

A brainchild of Festival director Mushtaaque Ali Ahmad Khan, the seven-day festival is committed to bring the best of the world’s films to Kashmir.

Festival is all set to provide a platform to the talented filmmakers of the valley.survivors, as a way to give back to society. We look forward to hosting many such bespoke events.