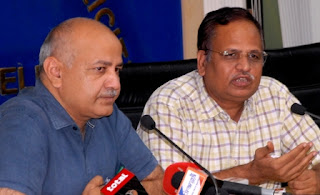 New Delhi: Amid the deteriorating situation in Bihar and rising death toll in the acute encephalitis syndrome (AES) outbreak, Deputy Chief Minister Manish Sisodia has termed the Ayushman Bharat scheme as a white elephant. He said that the scheme has failed the people of the country and is not practical as what is required is to strengthen our healthcare infrastructure and access for all to healthcare.

It is to be noted that the death toll in Bihar in the acute encephalitis syndrome (AES) outbreak has risen to 112 today, with several hundred children still admitted in Bihar hospitals battling for life. With the visuals of the suffering children playing in the media, the entire country is concerned for the children of Bihar. Deputy chief minister Manish Sisodia and Health Minister Satyendra Jain shared their views on the ongoing Bihar healthcare crisis.

The Bihar crisis has raised questions on the level of preparedness and the effectiveness of health schemes being run by the Central government like Ayushman Bharat. “The Bharatiya Janata Party and their Central government ministers have been advertising the Ayushman Bharat scheme lately. Unfortunately, this crisis has proven that the scheme is a white elephant. The scheme does not provide healthcare coverage to most ordinary citizens since the eligibility requirements mandate that persons who own telephones, 2-wheelers or fridges are not covered under the scheme. Moreover, the scheme does not provide coverage for primary healthcare and Out-Patient treatment,” said Dy CM Manish Sisodia.

“During such severe healthcare crises, it becomes clear that what people truly need is a strong network of healthcare infrastructure, not insurance schemes like Ayushman Bharat. Instead of enriching insurance companies, the government should have focused on building Mohalla Clinics, Poly Clinics, adding capacity to existing hospitals and building more hospitals.

Health Minister Satyendra Jain raised the question of why children suffering from AES in Bihar are not being treated at private hospitals under Ayushman Bharat scheme. He said, “Most of the children suffering [from AES] would have qualified under the eligibility requirements of Ayushman Bharat. Yet we find that all children are being treated at the government hospitals. What has happened to scheme in this case?”