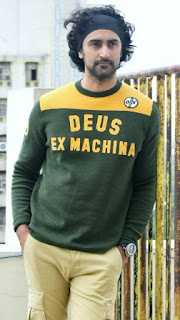 The critically acclaimed actor Kunal Kapoor has left no stone unturned for the upcoming movie Nobleman, which a Spin to Shakespeare’s Merchant of Venice. The tale of ambition, bullying, and loss of innocence is directed as well as written by Vandana Kataria under the banner of Yoodle Films. Starring Kunal Kapoor, Ali Haji, Mohammad Ali Mir, Muskaan Jaferi and Shaan Grover, the film is all set to release on 28th June 2019.

The film brings forth an extremely unconventional story set in a Posh All Boys Boarding School of India. It tells about a 15-year-old boy and his struggles of adolescent years and his fight for his already proclaimed role in the story of revenge, Merchant of Venice. The fight stirs a series of events that lead to loss of life and innocence. The film was premiered at New York Indian Film Festival.

Present at the event Actor Kunal Kapoor on being asked about his character, replied, “The character stands very unique to the persona of a common teacher, he believes every child is different and should be treated that way. This also leads to the other teachers disliking him because the character’s liking towards children brings forth an innovative way for him to deal with them. That is what attracted me and insisted me to do this role.”

Vandana Kataria on being asked what made you seek a different concept and English format of the film, “The reason behind is the setting of the Posh All Boys Boarding School, where such world demands this language. I do realize that this brings down the number of audiences, but that is the risk we are willing to take. For this eccentric concept, I took the world famous Merchant of Venice and translated it to an All Boys Posh Boarding School. ”

“What mattered to me the most was the film received utmost recognition and appreciation, which is why I’m very grateful to Vandana. At first, I could not believe that I did win it, but to be precise, it was all possible because of everybody’s collective energy and dedication.”, Ali Haji said on his reaction on winning Best Child Actor at the New York Indian Film Festival.

The film puts together very creatively and responsibly horrors within noble institutions, who present themselves as culturally superior.