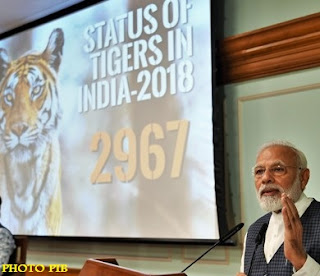 This  International Tiger Day 2019, a good news for India when Prime Minister Narendra Modi released the 4th cycle of All India Tiger Estimation – 2018 and declared that India has right now almost 3000 tigers. Certainly India is today among the biggest and most secure habitats.

Prime Minister described this as a historic achievement for India, and reaffirmed India’s commitment towards protecting the tiger. The Prime Minister appreciated the speed and dedication with which various stakeholders worked to achieve this. He described it as one of the finest examples of Sankalp Se Siddhi. Once the people of India decide to do something, there is no force that can prevent them from getting the desired results, he declared.

The Prime Minister said that with almost 3000 tigers, India is today among the biggest and most secure habitats.

India will build more homes for our citizens and that the same time create quality habitats for animals. India will have a vibrant marine economy and a healthier marine ecology. This balance is what will contribute to a strong and inclusive India, the Prime Minister asserted.

In the last five years, while work has proceeded at a fast pace for next-generation infrastructure, the forest cover in the country has also grown. There has also been an increase in the “protected areas.” In 2014, there were 692 protected areas, which increased to more than 860 in 2019. The “Community Reserves” have also grown from 43, in 2014, to more than 100 now.