Home » » Unlabelled » Getting the Security Deposit of Candidates in LS Polls are reply to AAP Falsehood: BJP

Getting the Security Deposit of Candidates in LS Polls are reply to AAP Falsehood: BJP 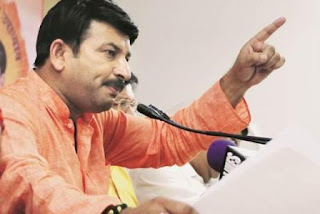 Delhi BJP President Manoj Tiwari has said that it is progressing in the process of regularizing the unauthorized colonies be it on private land or public land adopting separate process.

Delhi BJP President Manoj Tiwari with a delegation of BJP with leader of opposition Vijender Gupta met the Lt. Governor Shri Anil Baijal to get information on the process of regularization of unauthorized colonies.
Modi termed Kejriwal as Naakaam Panthi who supports Tukde-Tukde gang
Mr. Tiwari blamed that Aam Aadmi Party always tries to take credit and creates hindrance in the development of Delhi. We have to take such steps for the regularization of unauthorized colonies which are in the interest of the people of Delhi and there may not be any hindrance.

He further added that people of Delhi very well understand the falsehood of Kejriwal and they have already given a befitting reply to Aam Aadmi Party by getting the security deposit of AAP Candidates forfeited in Corporation and Loksabha Elections.
Kejriwal is the greatest enemy of Full Statehood for Delhi; BJP
Prime Minister Narender Modi Government has implemented many development works in Delhi but Kejriwal tried his best to obstruct them. The aim of BJP is to give ownership rights to the people of unauthorized colonies and provide them basic amenities.

Tiwari further added that following the historic decision of Central Government to give ownership rights to the people living in unauthorized colonies by regularization of colonies and getting the plots registered, we requested for information about the progress in this regard and also any other requirement.

There is no space for truth in the BJP; Rahul Gandhi