Glasgow:In their second match in the Champions Challenge 1 played in Glasgow National Hockey Centre, Scotland, though the Indian women hockey team put on a good fight in the initial stage of the match but ultimately lost the game to Scotland by 0-4.

Scotland made a confident start and proved to be dominating from the very beginning of the game winning a penalty corner in the fourth minute but failed to convert the same. Indian goal keeper denied another goal opportunity to Scotland in the 11th minute as well and the replacement goal keeper Yogita Bali did an exceptional job in holding Scotland back from opening their account, as both the Indian goal keepers proved to be efficient and restricted Scotland in converting most of their opportunities into a goal.

It was only later in the 30th minute that Scotland’s Nikki Kidd carved her way and pierced in a goal and helped her team to open the account. It was Scotland’s Emily Maguire who further helped in taking the lead to 2-0 in the 33rd minute and helped Scotland sit comfortably with 2-0 lead by the end of the first half itself. 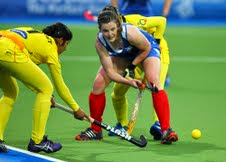 In the 41st minute of the game, it was Vikki Bunce’s strike which got Scotland claim another goal to their account taking a 3-0 lead over India. India’s effort to open their goal account was crushed by Scotland as all the opportunities were either tackled away or stopped by the Scottish goal keeper. It was in the 66th minute of the game when Scotland sealed their victory with a 4-0 on board through Becky Ward.

India will now clash against Belgium tomorrow in its Pool A group.