Love Raj Singh Dharmshaktu is hails from Bona village, Kumaon Himalaya. He worked at Uttar Pradesh Tourism Office on Spl Duty and took his adventure course. Later, he has completed Basic Mountaineering and Advanced Mountaineering Course from Nehru Institute of Mountaineering (NIM) in 1990. He earned a specialization in Search and Rescue. 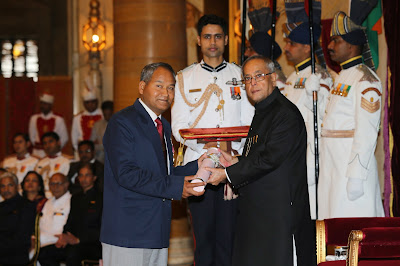 Some of his other noteworthy conquests include the Kanchenjunga (8586 meters), Nanda Ghunti (6309 meters). Nanda Bhaner (6236 meters) and Mamostong Kangri (7516 meters) He has climbed over 38 peaks in 22 years. In the future he intends scaling the five peaks known as Panchchulli in Uttarakhand. In 2008, he reached the peak of Kanchenjunga (8586 meters) alongwith a BSF team in June’ 2012. Love Raj Singh Dharmshaktu is spirited eco-warrior, taking part in awareness drives specially with regard to littering on trekking routes on Mount Everest in Delhi. As a hill native, he knows the uses of medicinal herbs and plants, sometimes opting for these remedies over conventional medicines.

Love Raj Singh Dharmshaktu participated 38 times in various Nationals levels events and win various awards including Tenzing Norgay National Adventure Award in 2003 by Prime Minister of India for outstanding achievement in mountaineering including citation and cash reward of Rs. 1,50,000. Award by Edmund Hillary in 2003 on golden Jubilee Celebrations of Everest organized by IMF.