People see an end to their difficulties through Modi’s assurances: Harsh Vardhan

0 News-Delhi
A+ A-
Print Email

New Delhi: “Narendra Modi has become the apple of everybody’s eyes. People of all age groups, religions and castes will sink traditional differences to vote overwhelmingly for the BJP in Uttar Pradesh,” Dr Harsh Vardhan said here today after a two-day tour of the eastern region of the state.

Dr Harsh Vardhan met a cross section of voters, including those from the minority communities and new voters, in Gorakhpur, Deoria, Maharajgunj, Siddharthnagar, Khushinagar and adjoining districts of eastern Uttar Pradesh. He got a lot of feedback from the people during his public appearances and meetings in the area.

During his stay he also confabulated with local intellectuals, members of the RSS and his own medical fraternity. On the drive from eastern UP to Luckknow, he stopped at various places including Faizabad and Basti to get afirst-hand knowledge of the woes of the people there.

He said, “People don’t usually lie to doctor and I told them to be frank with me. They said that they are going to give Modiji a chance because they have had enough of false promises and assurances. These areas are among the most backward in South Asia and they want to see an end to their poverty.”

Dr Harsh Vardhan made a personal reconnaissance of the region and realized the people’s difficulties. What struck him as particularly poignant was the utter collapsed state of public health infrastructure wherever he went in Uttar Pradesh. The few hospitals he visited had only basic OPD services and next to no indoor facilities. 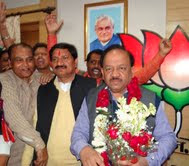 What was most disconcerting and tragic was the exposure of the people to deadly diseases which have their root in unsanitary conditions. There is every evidence that UP has not had a functioning government for a long time.

“Gorakhpur is world infamous for the high incidence of encephalitis in the region. More than 6,500 people have died there since the disease was first detected in 1978. More than 500 lives were lost in 2012 and over 350 in 2013. But the UP government has not even developed a coherent plan to combat it and the funds deployment is abysmal,” Dr Harsh Vardhan said.

He said that if a BJP-led government is sworn in at the Centre under Narendra Modi ji, a plan specially focused on all-round development of eastern UP will be given high priority. It will address the utter lacuna in social infrastructure which will certainly bring down the incidence of encephalitis.

Dr Harsh Vardhan pointed out that though the region has great agricultural potential, nothing much has been done to secure the people from the ravages of annual flooding.

He said, “I met people who told me that they have been used to living with floods, and they have no hope of getting any help from the government to overcome their difficulties. During the monsoons, they have to spend many months on temporary shelters and community-made embankments. Children can't go to schools as schools remain closed until the flood waters recede. They also face acute drinking water shortage.”

The Delhi BJP chief, who was touring the area to assist the BJP’s campaign, said, “The people are seeing an end to their difficulties through Narendra Modiji’s assurances. What he has done for Gujarat’s agriculture will be replicated here.”