New Delhi: The Action Hero is an iconic fixture of Hindi cinema, so much so that even a partial roll call of actors who have made their bones in such roles could outlast a montage of every movie scene. But while you can’t throw a curiously ineffective frag grenade or unleash a burst of machine gun fire without nearly hitting an actor who has done a stint or two in the Action Hero role but now the female Action Hero or first woman 'hero' as it can be said is “Kangana Ranaut as Revolver Rani” is in the town and had made crazy about her conical bras, wild, curly hair and proudly sports a sun-kissed, tanned look.

With a revolver as her weapon of choice, she sports army jackets, salwar and combat boots. She's loud, crass and violent. Set in the badlands of interior Madhya Pradesh, Sai Kabir’s directorial debut follows Alka Singh (Kangana Ranaut), a feared dacoit, as she navigates the murky world of politics and the murkier world of love. Revolver Rani Starring Debut actress Miss India UK Deana Uppal is all new for Bollywood but the bold and beautiful actress has proved that new comers can also beat the experienced ones. The actress has won accolades from all over for her debut movie. She touched heart with her simple yet powerful performance. 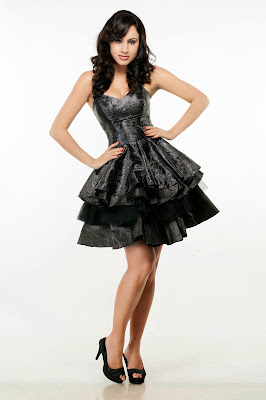 Revolver Rani is a rom com which goes into the deadly world of goons, where guns speak in volume. The film flits from the personal to the political, the emotional to the egregious, and the absurd to the deadly serious. For the most part, Revolver Rani hits the bull’s eye. Movie critic of HelloMumbai said, “The characterisation of the characters in the land of dead is mostly humourous. Alka loves ‘phasion’ and so she loves designer metallic bra from Italy which only she could dare to don. She even is differently wild when wants to play with her ‘toy boy’ Rohan. Such is the psychology of Alka who is least bothered about what people say about her. Deana Uppal had done a brilliant job in the movie.”

According to Dubaitoday, “After watching it you realize that you are watching a desi version of Kill Bill in Revolver Rani. It’s got Quentin Tarantino written all over each and every sequence, the director having broken the film down into just that — a series of well-orchestrated sequences. And in tune with director Sai Kabir's aesthetic inspiration, Revolver Rani exudes Tarantino style pulpy kitsch, much to the amusement of an unsuspecting Indian audience. Deana Uppal is pretty, and has a large and expressive pair of eyes and got audience glued on her others were not able to make their impact.”