Congress led UPA was not committed to get black money: Nirmala Sitharaman

New Delhi: BJP spokesperson Nirmala Sitharaman has said that the Supreme Court of India has stated that the central government has committed "gross Contempt of Court". The government of India has failed to comply with the SC orders issued three years ago on July 04, 2011.

The SC had then ordered the GOI to divulge the details of bank accounts held abroad in Liechtenstein. The court had said in no uncertain terms, "disclose forthwith" to the petitioner. Three years afterwards, today, the government is yet to disclose. The government has conveniently chosen to wait till the completion of investigation by the SIT. The SC has given time to the GOI till Tuesday, 29th April, 2014.

She stated that the Supreme Court had also dismissed the government's plea that the double taxation avoidance treaty between India & Germany prohibited revealing the names of those Indians, who hold accounts in Liechtenstein. 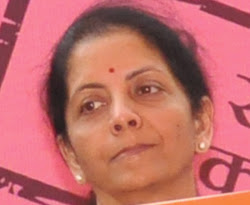 Again for the record, let it be said here, that not until December 14, 2005 did the United Nation Convention against Corruption come into force. Exchanging information for the prevention of tax fraud or the like has become possible only thereafter and the UPA led by the Congress Party has only been misleading the people of India on this matter. After much delay and pressure the UPA govt ratified this convention only in May 2011.

She further added that the PM Dr. Manmohan Singh had promised in 2009 that he will bring back the black money within the first 100 days of his taking charge. Importantly, the Swiss Government had passed an Act the "Retrition of Illicit Assets Act, 2011" which empowers its government to return black money to the country of origin of the depositors. France and Germany has invoked this Act to get their monies back.

In May 2012 the GOI came up with a White paper on black money, which said nothing. It speculated an the extent of black money in Swiss Banks.

The BJP took several concrete steps; it made all its Members of Parliament (MP) to sign an affidavit disclosing accounts held abroad. It constituted a Task Force which identified and gave details of Black Money.

The government stands completely exposed in this matter. It is neither committed to get black money back nor will it take action against Tax evaders in this country.

The BJP draws attention of the people of this country and seeks them to understand the link between corruption, black money and inflation under each & every Congress Govt. It is not a coincidence that Black Money thrives during Congress rule.