Raigad, (Maharashtra): About 18 innocent passengers killed and more than 60 passengers injured when a passengers train detailed today in Maharashtra. Diva-Sawantwadi is the name of the train which meets to the mishap earlier near the Nagothane in Maharashtra.

According to source, engine and four coaches of a passenger train derailed here when it was on its destination.

Maharashtra Minister R.R. Patil said that 18 persons lost their lives in the tragedy which occurred today. However he said that it may be a case of technical problems which caused derailment. 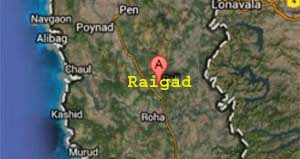 According to sources, the railway ministry announced an ex-gratia of Rs.200,000 to the families of the deceased. Those who have injured grievously will get Rs.50,000 and Rs.10,000 to those with minor injuries.

Due to the incident, the communication has been affected on the track and passenger and goods trains’ traffic on the Konkan Railway network has been paralyzed.

However sources said that Konkan Railway has made arrangements for special buses to ferry thousands of passengers, mostly vacationers either bound to and from Goa and Kerala, to reach various destinations.