Snoopgate issue: NCP and NC laid UPA in trouble in lieu of Modi

0
A+ A-
Print Email
New Delhi: It has been said that when the bad time comes, your shadow starts detaching with you and the something happening with Congress right now displays the same. Although Congress has decided to set up an enquiry commission to probe the snoopgate allegations against BJP leader Narendra Modi, but right now UPA alliance NCP and NC has opposed the move.

Certainly these differences with alliances will damage the coming aspects of Congress in the coming days. 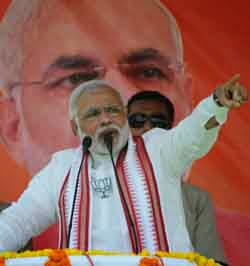 According to sources, Nationalist Congress Party (NCP) leader and union minister Praful Patel has said that the decision to set up an inquiry into the allegations was taken in December and now it is not justified to go forward for this when only 10 days is left for the election results.

Another UPA alliance, National Conference (NC) has also criticizes and raised question mark on the the timing of the order to appoint a commission.

Omar Abdullah twitted, "If the decision to appoint a commission was taken in December, it should have been implemented. To appoint a judge five months later, is wrong.”
Certainly the attitude of these two major alliances of UPA has giving a clear indication that all is not in UPA.