Glasgo: In the last match of the Champions Challenge 1, Indian eves went down fighting to the hosts Scotland 3-4.

India played in true competitive spirit and did not allow the opponents to score even a single goal in the first half. Both the teams played a brilliant game as the first half of the game turned to be goalless. 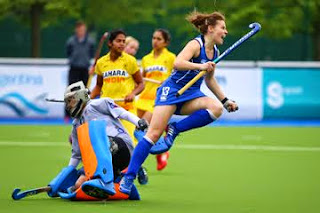 In the sparkling second half of the game Scotland’s Vikki Bunce took the lead and stroked in a goal in 44th minute. The game turned out to be in favour of the India as this time there were three continuous goals that came from the Indian team. India’s Neha Goyal equalized the score and gave India’s first goal in 46th minute which came through a penalty corner.

This goal was followed five minutes later by a goal from Lilima Minz in 51st minute. Navnet Kaur in 63rd minute then scored, again exploiting the gaps in the Scotland defense. At this point India seemed to have an unassailable lead.

Ailsa Wyllie scored a goal in 64th minute and broke India’s lead. A penalty stroke was then awarded to the home ground where Bunce leveled the scores by 3-3 and put it high in the net with another goal in 67th minute. With two minutes on the clock, Clement in 68th minute received the ball on the edge of the circle and her reverse stick shot flew under Savita to give Scotland victory.