Champions Challenge 1: India lost 2-4 against Belgium in a close match

Glasgow: Indian team gave a good fight in a close match against Belgium in the classification match of the Champions Challenge 1 played in Glasgow, Scotland today.

Indian team was defending very well from the start of the match in the first half. In the 20th minute of the game, Captain of Belgium Charlotte de Vos scored the first goal for the team through a field goal. Soon after in the 25th minute Poonam Rani scored the first goal for the Indian team by converting a penalty corner and levels the score by 1-1. Belgium team came back well and Emilie Sinia scored second goal for the team in 28th minute of the match through a field goal. Indian team defended really well and did not let Belgium score any more goals till the end of the first half. 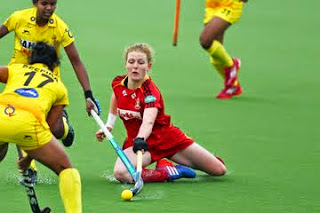 In the second half Indian team came back strongly and Monika scored the second goal for team in the 44th minute through field goal. In the very next minute (45th Minute) Louise VersaVel scored another goal for Belgium taking the lead to 3-2. Indian team gave a tough fight and was defending the attack of Belgium very well but in the 60th minute of the game Emilie Sinia scored another goal for the team helping Belgium to win the game by 4-2.

India will play host nation Scotland in the match for seventh place.