0 Entertainment
A+ A-
Print Email
New Delhi: Veteran actor Sunil Shetty, with upcoming new villion in the bollywood promoted their film Koyelaanchal at Wave Cinemas Noida.
At the conference Sunil said, “ That I am playing a role of an I.A.S officer in the film , who plays with his mind to beat his enemy rather playing with his power”, on asking about what scenario does film potray he added, “The film potrays some undiscovered parts of India where coal is burning several feets down the ground, and life is full of diseases over there”. On talking with Vipinno he said, “I am always a fitness freak, and done a lot of Hard Work to get this shape”. He stole the show by putting his T-Shirt off. 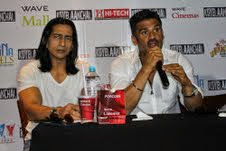 Koyelaanchal unveils itself through Saryu Bhan Singh (Vinod Khanna), an ex-owner turned Mafioso of the region, who through his sheer brutality & blatant defiance of law of the land, forces the people & the authorities to acknowledge him as their ‘maalik’. Any protest, any voice of dissent against him is dealt with spine chilling violence of epic proportions.
Directed by Ashu Trikha and produced by A.M.A entertainment Koyelaanchal is all set to release on 9th May 2014.