0
A+ A-
Print Email
New Delhi: If we believe on the existence of exit polls and its impact, then undoubtedly there is no doubt for the country as to “ Abki Baar Modi Sarkaar”. All the three independent exit polls have predicted the likely emergence of a BJP-led government at the Centre however the massive variations in their projections for the different states raising question marks on the authenticity of the exact results.
Despite the facts, not there is no doubt the Narendra Modi would be India’s next Prime Minister and NDA will come back to the power under the leadership of Modi who have given a new boost the expectations of the BJP. 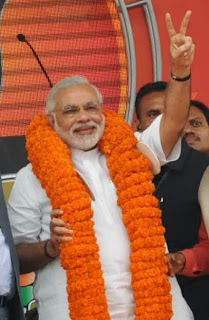 According to exit polls predictions,
ABP News given NDA 281 where as UPA only 97.
CNN-IBN gave NDA to 270-282 and UPA likely to 92-102
Times Now gave NDA to 249 and UPA 148. However there may be a massive variations in the exit polls prediction in especially the state results, but one thing is common that BJP and NDA will be single largest party or alliance in the country and it will formed the government.