Home » Entertainment » The Crime drama 'Lateef: The king of crime' to release in June now

The Crime drama 'Lateef: The king of crime' to release in June now

0 Entertainment
A+ A-
Print Email
Mumbai: The release of Film inspired from Gujarat Mafia Lateef has been postponed. It was to hit the theatres in April, now rescheduled for June release. Film depicts underworld’s operatives, bootlegging and decimation of rivals with help of police.
Producer of film Kewal Krishna says, “Gujarat Model is being presented as “all is well in Gujarat”, which is not true. Fake encounters, Mafias nexus with politicians and illegal business of arm are best known secret of Gujarat. We are creative people and our purpose is not to create controversy but to explore untouched life of the society in life. We have films on Mumbai Mafia and Bahubalis of U.P., but no one dared to explore Gujarat Mafia. Our film unveils the dirty face of Police, Politicians and Mafia and it can stir one’s feeling towards system. We, therefore, have decided to postpone the film till election result is announced and new Government is formed. We don’t have any pressure from Modi or anybody else.” 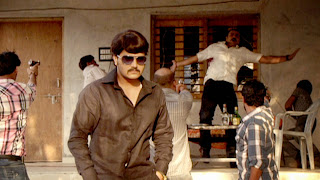 'Lateef : The King of Crime' based on Gujarat Mafia of 1980's
Shortcut Romeo: A romantic crime thriller film