The Trailer of one of the most awaited films of the year Humshakals will finally be out soon. The long due wait is now over and the trailer will be launched worldwide on Youtube. Sajid Khan’s films are always known for their out and out comic content and his spur full wit.

His upcoming film Humshakals is just an addition to his list of this condominium films. Based on the concept of comedy tripled, audiences are going gung ho to see the glimpse of this comedy flick.

The motion poster was just a teaser of sorts and now with the film nine weeks away, and releasing the poster would add momentum to the promotions of the films. The trailer will see fun multiply into nine and will make the audiences fall out of their chairs with laughter. Humshakals has an elaborate star cast of Saif Ali Khan, Ritiesh Deshmukh, Ram Kapoor, Bipasha Basu, Esha Gupta and Tamanah With entertainment touching the rooftop, these six brilliant actors are surely going to keep the temperature high this monsoon. 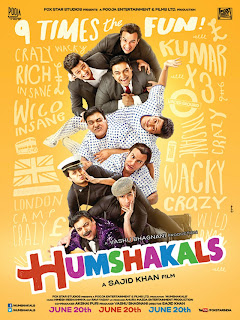 “The promo of the film is fast paced and the usp of the trailer is watching Saif Ali Khan, Riteiesh Deshmukh , Ram Kapoor in triple roles. The confusion and fun triples when our beauties Esha Gupta, Bipasha Basu and Tamannah enter their lives", said a source close to the production team.

Well, we can’t wait to see the trailer of Humshakals, can you?