Mumbai: Sajid Khan’s films are always known for their out and out comic content and his spur full wit. His upcoming film Humshakals is just an addition to his list of this condominium films. Based on the concept of comedy tripled, audiences are going gung ho to see the glimpse of this comedy flick.

Humshakals has an elaborate star cast of Saif Ali Khan, Ritiesh Deshmukh, Ram Kapoor, Bipasha Basu, Esha Gupta and Tamannah with entertainment touching the rooftop; these six brilliant actors are surely going to make everyone fall out off their seats with laughter.

What we hear is that, Saif Ali Khan will be seen speaking in Gujarati in the film fluently and some glimpse of it will be seen in the trailer as well. In fact, it was Saif himself who decided to experiment with his accent to his role to add the comic twist in the film.

This is for the second time he will be seen playing a gujarati in a film, he had played a gujju boy in Kal Ho Na ho. 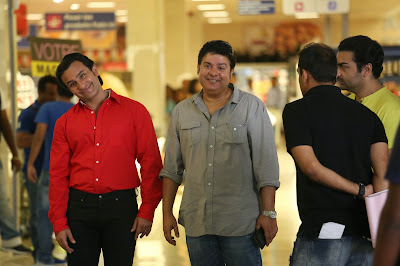 "Saif had to learn the gujju language little more fluently, and since it is not that difficult a task he started to talk to everyone on the sets in gujarati”, said a source close to the production team.

Well, we cant wait to see the new gujju boy on the block, can you?

Produced by Fox Star Studios and Pooja Entertainment, Humshakals is directed by Sajid Khan and is all set to release on 20th June!!