Mumbai: Oscar winner Jennifer Lawrence who reprises her role as the blue-skinned, shape-shifting mutant Mystique in X Men Days Of Future Past releasing on 23 rd May has several highly physical fight scenes in the movie, and during promoting the movie, she admitted that fists were flying off-camera as well. 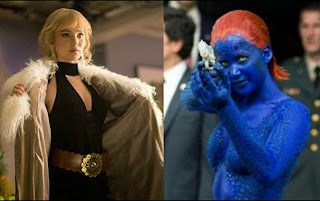 The X Men Days Of Future Past actor revealed that she was the on-set ringleader of the "circle game" -- a schoolyard prank where you hold your thumb an index finger in a circle somewhere below your waist and if you can trick someone into looking down at it you get to punch them in the arm.

Lawrence says, "I actually brought it to 'X-Men Days Of Future Past' from 'Hunger Games.' We play it obsessively, and I brought it to these guys. They really liked it. And I am the best, thank you for asking."

Well the X men beaten by an X Woman.

Catch X Men Days Of Future Past releasing on 23rd May.