New Delhi: Making a direct attack on the BJP, Congress has introduced a political resolution in front of thousands of people in its 'aakrosh rally' against the BJP and the Aam Aadmi Party in Delhi. The rally was presided over by ex-MLA of Ghonda Bhisham Sharma.

A large number of people from the minority community also participated in the rally. In a unanimous resolution passed at the Aakrosh Rally, the Congress workers and the local people strongly condemned the move to form an unconstitutional Government in Delhi by a communal party like the BJP, and warned the Union Home Ministry and the Raj Niwas that the BJP should not be allowed to form a Government in violation of all constitutional and democratic norms. 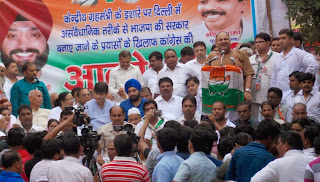 Addressing the rally, Shri Arvinder Singh and Shri Haroon Yusuf said before forming a Government in Delhi, the BJP should announce the number of MLAs and their names who are supporting them. They said after the passage of the Anti-Defection Law in the country, without declaring the number of MLAs supporting the party which stakes the claim to form a Government, it would be not only in violation of the core principles of the constitution, but if such an anti-constitutional step is taken, it would also amount to the murder of democracy.

They said the BJP was scared to face fresh elections in Delhi, because the BJP knows that the people were now longing for the Congress rule. They said the Congress party will not allow the confidence motion to be held even if the BJP formed a Government. They said if the BJP had any sense of fair play, it should recommend the resolution of the Delhi Assembly. Shri Mukesh Sharma, criticizing the BJP at the Aakrosh Rally, said if the BJP misused its powers to form a Government in Delhi, it would be remembered as a black day in the democratic history. He said it has been established, with the BJP running away from elections that Shri Narendra Modi’s promise of bringing good days has proved to be mere rhetoric.