Ahmedabad: The President of the People's Republic of China, Mr. Xi Jinping and the First Lady Ms. Peng Liyuan arrived in Ahmedabad, Gujarat. They were received at the Hyatt Hotel in Ahmedabad by the Prime Minister Narendra Modi.

Three Memoranda of Understanding (MoUs) were signed between the two countries in the presence of the Chinese President and the Indian Prime Minister: 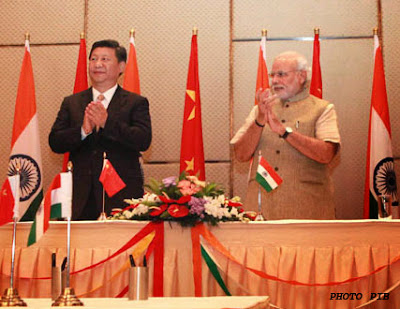 MoU between the cities of Guangzhou, China and Ahmedabad, Gujarat, India for closer cooperation between the local authorities of the two cities, which will facilitate engagements in the fields of economy and trade, environment protection, public policy, education, health, science and technology, tourism and culture. Knowledge sharing will be done through delegation visits, institutional meetings and sharing of experiences in areas of mutual interest.

MoU between Industrial Extension Bureau (iNDEXTb), the nodal agency of Government of Gujarat for investment promotion, and China Development Bank, under which iNDEXTb will assist Chinese investors in obtaining required clearances and creating infrastructure facilities in the industrial parks.