0 News
A+ A-
Print Email
New Delhi: D K Pathak, IPS, Director General, Border Security Force launched the new year calendar for the year 2016 and extended warm greetings and best wishes to all the ranks of the Force and their family members.

In the opening of function, Shri P K Dubey, IG (Administration) welcomed all the BSF members for the New Year function and informed about the achievements of BSF in the year 2015. 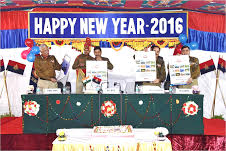 On the occasion, Shri D K Pathak, IPS, DG BSF said that, in the year 2015 we did very well and made many mile stones and expecting that same we will do in the year 2016 also.

On this occasion, Shri D K Pathak alongwith other senior Officers released the Annual Calendar of Border Security Force. The BSF Calendar for the year 2016 depicts about the condition where BSF personnel performs their duties. In addition to this, it also gives the glimpse of recently held 50th BSF Day Parade.