0 Entertainment
A+ A-
Print Email
New Delhi: Deepak Kalra is an anchor, actor and most famously known as the biggest SRK fan. The proof of his fanism is the fact that he’s inspired his favourite actor to incorporate his personality’s unique gestures, like into his character.

As per the ‘FAN’ promos, SRK’s character Gaurav is a Delhi guy and to mould himself into the character he’s drawn inspiration from real life people and major contribution goes to Deepak. 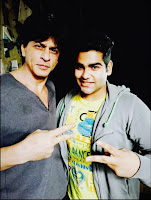 Talking about Deepak, SRK says, “Deepak said a dialogue to me and the way he speaks had impressed me. I have used a few personality traits of his, especially the way he makes the sound of opening a bottle’s can and kissing towards the end. He was really inspiring. Thank you Deepak, may God bless you”.

Knowing that SRK is always at his humorous best, he added, “I can actually expose you Deepak talking about your girlfriends. Makes me wonder if I should do it or not”.

Sources reveal that ‘FAN’ has Deepak in the opening scene where he’s essaying the role of a comical Superman. ‘FAN’ has released this Friday to rave reviews.