Odd-Even part-II: Is a pressure on Public without improved Public Transport system

0 In-News
A+ A-
Print Email
New Delhi: The new version of the Odd-Even part-II in New Delhi is not going to appreciated by people like first phase. People are bound to face the ordeals of the commuting during these days and parties have blamed AAP Government for the same. 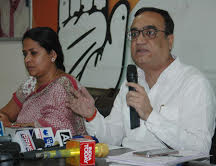 According to Maken, the DTC fleet utilization and route capitalization going down, private vehicles have gone up  in the Capital, and the very purpose of reducing pollution with the introduction of the odd-even scheme will be defeated if the number of  two-wheeler vehicles on the roads is not brought down, as presently the number of two-wheeler vehicles have only gone up in the absence of an efficient public transport system.

After the AAP Government came to power in Delhi, there was a record low in the fleet utilization and route capitalization by the DTC. Kejriwal Government could have and should  have improved the DTC services, as the Delhi Metro was a gift of the Congress Government and it was an autonomous body, and despite the metro providing an efficient service, it was not sufficient to cater to the entire need of the Delhi public transport system, which can be improved only if the DTC improves its service.